Tourism Concern, our new partner, who share similar values to us regarding sustainable, green and ethical travel, explain the advantages of community-based tourism and the benefits, through many examples of their work. We hope you enjoy this article especially written for us by Polly Pattullo.

Tourism is no longer a dirty word in Mae Klang Luang, a small village in the Dol Inthanon National Park in northern Thailand and only a couple of hours drive from the city of Chiang Mai. In the past Thailand’s tourists numbering some 13 million a year had little interest in such places with their modest clusters of bamboo and thatch homes set on gentle slopes among rice fields. Instead, they piled into the beach resorts of the South, forged to succour the dreams of stressed out Westerners. Thailand is good at providing such respite, but it is not so good at nurturing a tourism that benefits the many Thais who have seen their traditions and communities overrun by hordes of hedonists. Now there is the emergence of a new concept, community-based tourism an idea and practice that is more sensitive to the local environment.

What is Community-based tourism…?

What a handful of Thai villages, and Mae Klang Luang is one of them, are now offering is quite the opposite of mass tourism. Community-based tourism is where visitors stay in local homes, have a glimpse into traditional life, and, most importantly, where management and benefits remain with the community. This means that villagers are properly paid, their culture is respected, and decisions about what the tourists do and see remains with the villagers. No longer, as used to happen in Mae Klang Luang, so tourists arrive unannounced, ask for drugs, show no respect, gawp at the villagers, and depart leaving garbage but no money.

Instead, a radical shift in the balance of power means that community-based tourism now benefits the village while the visitors glimpse the ways of local people. There is a hike through the forest learning about the use of plants, a visit to the village organic garden and the fish farm, sipping cups of freshly roasted coffee (fairly traded to the Chang Mai Starbucks, say the villagers), and, of course there is plentiful food, and the hospitality of a village family for a nights sleep. There is even a small museum full of household equipment and old tools. Even in Mae Klang Luang plastic is replacing terracotta and bamboo and Som Sak, one of the key villagers behind the community-based tourism initiative, knows that the village must hold on to its heritage.

Indeed, at Mae Klang Luang, tourism has replaced a negative dependency on poppy-growing and the degradation of the forests. As Som Sak said: If tourism is one part of our economy we can save the forest. It is sustainable. Essentially, tourism has become a tool for development. It is a way for the villages rice-growers, organic flower farmers and foresters to become decision-makers and to continue their lives in a sustainable way.

It takes a Fishing Village…

The same positive reaction to tourism has also been gathering momentum in the often over-exploited fishing communities of Thailand’s south. In Koh Yao Noi, for example, one villager recognised how tourism could strengthen their culture. The sea is normal to us, he said, but it is really interesting to tourists. In the past we didn’t see it as important but taking visitors fishing makes us see things differently. Our tourism is not what you get from a hotel, but our service is from the heart.

What is happening in Thailand is a completely new approach. But such positive results do not happen by accident. Progress in Mae Klang Luang and Koh Yao Noi was made possible through a radical partnership between tour operators, both local and international, and the communities themselves, initiated by a small Thai NGO called the Community-based Tourism Initiative (CBTI). Their work creates an important model, and one that provides a power base for the hosts: as Peter Richards, a CBTI worker, said: Villages are not products, they are being empowered by the process. It also nurtures a fruitful relationship for the tour operators, and a fascinating holiday for the tourists.

CBTI is also responding to what a small but growing body of holidaymakers want. As one tour operator who works with the CBTI told some community leaders: Our guests are looking to discover your way of life, not a prefab additional or one that you think they might want. They could go to a theme park for that.

Community-based tourism is just one of a number of terms used to describe holidays that benefit both the traveller and the destination. Hard and fast definitions may not exist but the words green, responsible, fair trade, positive or ethical tourism (eco tourism is another term but now often associated with green wash and limited to environmental concerns) are all about treading lightly on peoples homes and cultures, about a positive interaction between guests and host countries, and about an awareness of our impact on the well-being of the places where we take our holiday. Essentially, such holidays seek to minimise the negative impacts of tourism and maximise the benefits to hosts.

Sometimes this might sound sanctimonious or a bit po-faced. Those who use the phrase politically correct to denigrate such experiences like to sneer at the terms ethical or responsible tourism. Critics say that those who promote ethical tourism are snobbish elitists, who are idealising some pristine age before Tuscany, Barbados, or that little place in Kerala had been ruined by ordinary people. The implications are that the holidaymakers who try to be ethical are holier than thou and that their holidays are not really holidays at all but some sort of wearisome social-work project disguised as pleasure.

This could not be further from the truth. Holidays such as those at Mae Klang Luang are as much fun, and can provide as much excitement and wonder as any other sort of holiday. As the website responsible.travel.com says: If you travel for relaxation, fulfilment, discovery, adventure and to learn rather than simply to tick off places and things then responsible travel is for you. Responsible tourists can make a difference by getting closer to local cultures and environments and by involving local people. 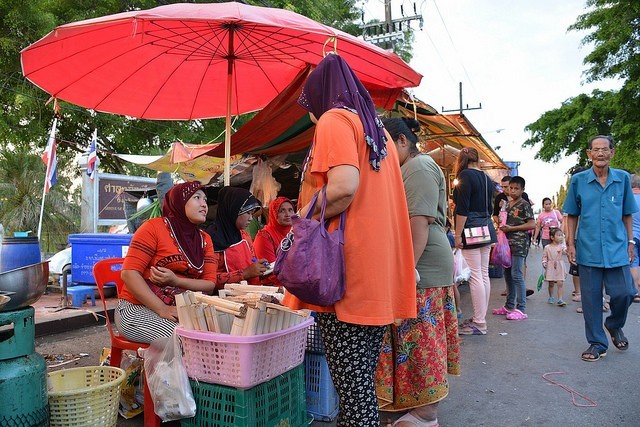 Community-based tourism visible in the markets of Thailand

Travelling to benefit the destination as well as the traveller has become a talking point. The growing crisis of climate change has focussed our attention on the environment and the damage we do our planet and its peoples. It also makes us reflect on what we as individuals could and should be doing about it. Thats not looking backwards. That represents the cutting edge of thinking. While the travel pages of newspapers have been slow to pick up on this, they no longer ignore the debate. Travel articles about green skiing, about the problematic growth of golf courses or whether its acceptable to swim with dolphins now crop up more regularly, at least in the broadsheet newspapers. As the Observer newspaper commented: Go on holiday and save the world may sound like a title of a Ben Elton sketch, but the idea seems to be catching on. Such articles at least sow the seeds of the idea that tourism is a human rights issue.

A brand-new role for consumers is transpiring, through community-based tourism, a new market has emerged from three trends: first, there is a thirst for different and more exciting holidays; second, there is a growing realisation of the negative impacts of tourism. It’s clod-hopping footprints in other people’s homes in the deserts, forests, sea-shores, mountains of the world, and, thirdly, of course is climate change. These moods have come together to build a demand for a new type of holiday encapsulated perhaps in the slow travel movement, which emphasises the pleasures of the train over the plane, the reflective moment rather than instant gratification.

However, the ideas behind ethical tourism are also part of something broader a global consumer movement, which is strengthening as people flex their muscles and make conscious choices about how they spend their holiday money and why. These ideas may be strengthened as economic recession and climate change trigger unprecedented naval-gazing into the choices we have to make for a sustainable future. At the same time there is also evidence of a change in business practices, evidence that some companies are beginning to embrace a social good element in their policy thinking. These ideas are, too, filtering down to the tourist industry. In this wave community-based tourism is gaining popularity.

The fair trade movement is a pioneer of this; it is proof that there is a new wave of people power that can provide producers in developing countries with a fair share of the returns from the sale of their produce. Just as more consumers are choosing fairly traded coffee or bananas because they know that such a purchase supports a small coffee grower or banana farmer rather than a multi-national company, so they are beginning to seek a fair trade type of holiday.

While fair trade products benefit the producers on the ground so fair trade tourism maximises the benefits to the host countries and their workers. The fact that you can now not only read about fair trade, responsible holidays or ethical holidays but also go on something approximating one shows how far tourism is changing for the good. This is something that alternative holidays such as house-sitting has helped to deliver.

To Register as a Homeowner yourself follow this link HOMEOWNER REGISTRATION