In this 2022 Housesit Match Blog Competition entry by June Spindloe you will learn about the experience of a couple housesitting in Windsor, England. During this petsitting assignment they learned how to housesit near a river. Read on to learn how they cared for cats and chickens while coping with the various flying creatures natural and man made along the River Thames near Windsor. The theme of this year’s blog competition was ‘Tell us about a fun housesit you did recently’…

To vote for this shortlisted blog access the voting page via the Housesitmatch weekly Newsletter – Sign up here. 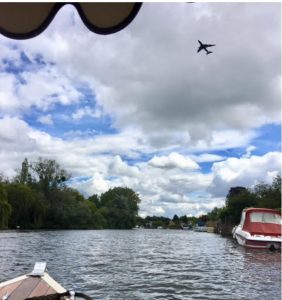 The planes were ever present and noisy after 6am each day

A few years ago we applied for a housesit on Friary Island located near Windsor UK. This would become one of the most unique and amusing housesits we have completed to date.

At that time we were having fun exploring sits with an island theme. We had been to Isle of Wight, Mersea Island, Hayling island and so applied for Friary Island! It may surprise you to learn that there are lots of islands on the Thames But then again, the Thames is a pretty long river. It starts near Kemble in the Cotswolds and ends in Southend past London.

As it turns out Friary island is accessible by a road bridge and has around 40 inhabitants. It is also located directly under the main flight path for Heathrow Airport (no surprise, this wasn’t mentioned in the housesit advert). This all made for a fun experience when housesitting near Windsor.

Use of the boat

I won’t deny that the main attraction of this sit for us was the use of the owners small electric day boat. The boat was moored on the Thames at the bottom of their garden, and my husband Mark couldn’t wait to explore unknown waters in it.

After we arrived and the day before the owners left we had a tour of the house. They were an interesting couple one was a retired designer and the other worked in robotics.

Their large old character home was filled with a lifetime of their eclectic collections.. There were fascinating items hung on walls, displayed in cabinets, and on every single surface there was a curio of some description.

Another highlight was a huge projector screen in the living room, which lowered at the touch of a button. We watched the Wimbledon Final with almost life size figures running across the screen directly in front of us.

We watched the Wimbledon Final with almost life size figures running across the screen in front of us, from two highly collectible vintage Eames lounge chairs. This was a fact lost on us at the time, but my brother who is an antiques dealer dropped by and couldn’t believe his eyes.

Wake up call with planes – challenges of housesitting near Windsor

We were woken up every morning at 6 am. And then every ninety seconds a plane would take off after that, and would go on all day long.

We would sometimes have to stop mid conversation as it was so loud you couldn’t hear each other speak when in the same room. After about a week we seemed to do this without thinking!

Caring for the cats

There were two cats one an elderly Siamese who was the mother to an autistic daughter who was tortoiseshell. They curled up asleep in a basket during the day and then when they woke up the autistic cat meowed continuously and followed the mother everywhere.

They were voracious hunters and brought mice in almost every day for us to admire.

Keeping chickens were a hobby for the owners and there were six in total. Each chicken was a different breed. The smallest chicken, named Chicken Little, was ostracised by the others. And because of this behaviour Chicken Little would walk into the house everyday to find food and have cuddles with us.

Its favourite treat was the dry cat food and then after eating it would hop onto my shoulder or lap for a cuddle.  At dusk ‘Chicken little‘ would refuse to go back into the hen house and would launch itself into a nearby tree. Most nights we managed to retrieve it before it got dark We were warned that foxes had already eaten a previous stray.

Housesitting near Windsor on an English river

On hot Summer days we spent our spare time on the day boat, zipping up and down the River. We used the lock system to explore the Thames going past Windsor Castle in one direction, and then down the river to Runnymede and past the spot where the Magna Carta was signed.

We watched the world go by from the sunny back deck. There was never a dull moment. One day a giant duck went by. Thankfully caught on camera! A couple of times a week the French Brothers  pleasure boat would cruise by. Originally built for the 1984 film “Tarzan, the legend of Greystoke”, the Lucy Fisher is a replica of an African Paddle steamer. It’s rumoured that during the filming  the Green parakeets that now inhabit London escaped during filming and quickly started breeding.

Planes and parakeets and noise

In addition to plane noise we could hear these birds squawking early morning as they swarmed the fruit trees in the garden.

At the rear of the house there was a shed named The Raisbury designed by the home owner as a safe haven for valuable items in the case of flooding, this shed has the capacity to raise itself off the ground with steel sub-frame and four hydraulic legs that can be operated by remote control it was a finalist in a shed of the year award !

There was never a dull moment on this sit. This was also our first large Aquarium it filled the whole living room wall, my job was to pick two large lettuce leaves and peg them to the side of the tank where the fish munched on them.  By day we collected eggs, removed dead mice from the  home, watched planes take off and land. And in between we boated up and down the Thames. We even managed to fit in a visit to Windsor Castle to see the changing of the guard.

On the day that we left we were ready to go and then suddenly realised that we were one little chicken short !

After an hour of searching we were still unable to find him. It was then that I decided to search be methodical and search every where, even finally under the deck.  And there eventually he appeared. Hiding under a Kayak was little chicken ! After rescuing him I was quite sad to finally say goodbye to him.

We have really fond memories of this sit. It was so unique. And it offered us so many places that were full of our rich British history and some challenging pets and animal visitors.

We are June and Mark Spindloe. This is our fifth year as Housesitters, we’ve loved every minute of our nomadic lifestyle. I wont deny that at times it’s been challenging, but that’s what we signed up for in 2017 when we retired. We’ve now completed over 50 housesits, and during this time we’ve encountered such interesting people and places that we are now addicted to this lifestyle. While most of you reading this will know immediately what I mean, my family and some friends are bemused. However, we made the decision after lockdowns that we would have a home base to return to, should we get stuck again. We bought a house and spent the last Winter renovating it.

After eight months in one place we got itchy feet and last June we hit the road again. and started housesitting. We are now booked through to March 2023, though I guess we’ll have to go ‘home’ eventually. Right now we are in Vancouver not too far from where our youngest daughter lives. The nights  are drawing in. Winter lies ahead but I’m determined to catch up on my blog writing and have enjoyed sharing just one of our housesitting adventures. Happy to share any advice or just catch up

FURTHER READING ON HOUSESITTING AND PETSITTING

How to get started as a housesitter – Top Tips

How to travel on a budget – A housesitter’s tips