I Got The Music In Me!

Spread the love
Here we are on the verge of HouseSit Match going live after substantial delays and I have just spent the day with my head firmly buried in Spotify (which has just been released in Australia) when instead I should be harassing wayward web developers. But as the old adage goes, music does indeed make the world go around and it certainly does put a smile on your dial and smile, and the whole world smiles with you! 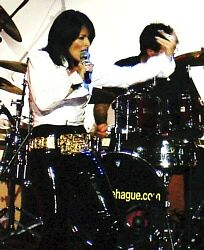 So, no I haven’t been smoking any funny stuff, I am just feeling a bit loved up with music and how great it is, remembering how it can evoke such tangible feelings and emotions. To that end I have put together a few Spotify play lists that I would like your opinion on so click on the links below and let me know your thoughts:

I took a few liberties including Cat People by the most wonderful David Bowie in my cat list which was from the eponymously-titled 1982 film. I know the song has nothing to do with cats per se but the word cat is in the tile!

I am now thinking of putting together lists for goldfish to coy carp, horses and farmyard animals. I am on a roll!