House-sitter and independent traveler Edward accepts a Long term house-sitting near Kiev. The owner is selling her home and emigrating to Montenegro, she needed someone to live in the house until it is sold. This blog describes Edward’s arrival in the Ukraine, meeting his homeowner Tina. He continues his ‘sharing economy’ story by telling us how Tina introduces him to the town of Brusilov, and his neighbours.  And so he continues his tale.

Journey’s end – Arriving at the long term housesitting near Kiev

Oleg our lift-share driver finally hit a stride. His coffee kicked in, and with worst behind us, our passenger van dozed peacefully, until we were woken with a full stop. My stop. I stood alone, bags in hand. As the van drove off, my companions’ faces seemed mixed with curiosity and pity for me, as they left me behind.

Next to his middle-aged Mercedes, there stood Boris, my Blablacar driver, a pot-bellied man with bling glasses and teeth and a toupee greased back with thin strands of hair ending in a stubby ponytail.

He made swooping gestures towards my oversized bags, but let me get them into the car. His body seemed to have outgrown his “Sunday best” clothing, and his manner was of a man who had sat on a couch idly for a long time, trying to remember how to work.

We were off. Once we cleared the town, the wide expanse of yellow fields lay uninterrupted except for the tree-lined county roads leading off into the distance. We took one of these, and the car started shaking like a boat in stormy water. Dust clouds rose from our seats and the sun-stroked vinyl dashboard came unglued and fell in our laps, twice requiring us to hold it in place. Boris offered reasonable sounding apologies in Russian, but he soon realised that I understood his tone, not his words.

A burnt Summer light flooded our morning. We got lost, and found our way again. A single tall building, like a jail or a hospital, marked the start of my new neighbourhood. We found my homeowner, Tina, waiting in the middle of one of the streets. She paid Boris, and wasted no time in giving me a great big bear hug.

Walking around her orchard Tina talked hurriedly, explaining plants and trees, and stories from her life. She was leaving this country behind. A house sitter could help – long term housesitting would help her while she finalised the house sale keeping her home safe and secure in her absence. After politely refusing some instant coffee, I pleaded exhaustion and collapsed into bed without another thought. I had been sitting upright in vans for something like 18 hours.

When I woke next, I noticed soft light on my half-opened suitcase. It was evening, and I was completely alone in the house for the first time. I took a look around. The house had been gutted, and only spare furniture and dusty bric-a-brac remained. I went there knowing it was not going to be a French chateau. And for camping standards it was fine. But being hit with the reality of a spare house with styrofoam walls in a remote, unfamiliar place struck me a little like the Theatre of the Absurd. A half naked, headless mannequin with grey tape made into breasts, gave the whole moment a final, Dada-ist touch.

I ran out of the house for air, going through a mental CHECK LIST in an at-tempt to consider ,my situation calmly, when I got a full blast of the Summer evening

Chirping insects filled the trees in Tina’s orchard, dragonflies and butterflies darting here and there in the sun.

As I checked through my list I felt myself calming down. My thoughts were broken only by an insistent ringing sound. It was a phone. I followed the sound inside the house and picked up the receiver to hear-

“Edward, I came to Kiev to see about my property. But I missed the last bus. Are you by the computer? Can you please help? Look at Blablacar?”

Via internet and phone we went through several rounds of finding numbers that didn’t answer. Of course the drama was heightened because it was late, she was stranded, the site I researched kept changing into Cyrillic, alphabet which I was still learning and she was running out of phone credit. Then almost as suddenly she stopped calling. and I wondered if she was lost somewhere with no working phone.

Many hours later, I heard a car stop in front of the house with a running engine. Tina came in, all rushed.

“Edward, Hi. I got here by taxi. What are you doing right now?”

I was going to bed.

“Edward, I have come in a taxi because I leave at 6AM tomorrow. Can we do a tour of Brusilov now? I told the taxi driver to wait outside, so I can show you the town.”

Firstly, a bit of geography is in order. Brusilov in the Ukraine is a one-street village. Of the few public buildings, one is a music school and the other a Courthouse. The neighbourhoods fan out from there. But that was the smallest part of the tour. Instead, Tina got down to business. In that pitch-black night, she showed me a village face without makeup.  In any other circumstances our journeying by taxi in the dark would be the cause of unbridled gossip; but it was perfect for this moment.

“This neighbour is good. She will help you. Her family goes to the local church. But the woman next door makes vodka. Her son died from it last year.”

Then she turned to the driver and gave a bulleted set of instructions in Russian. We went left, then right, then over dirt then semi-paved roads. As he was mechanically obeying her instructions she turned back to me –

“See that silver gate? That’s a bank you can trust. You can’t trust every ATM in this country. Ukrainians are very clever.

“Avoid these corners. The shop sellers there are lying a lot, they will steal all of your money, if they can. Here has alcoholics at night. Avoid it.

“Here the local people are living. This is where you can buy Lithuanian rye bread. I would suggest you avoid these cafés. Not to walk in the dark, because people are having troubles. So use the daylight for walking. Nighttime for being at home.”

By now we were heading back to the house.

“See that big house? Don’t talk to that neighbour. He’s in the police.

Tour over. Head full. Lights out. 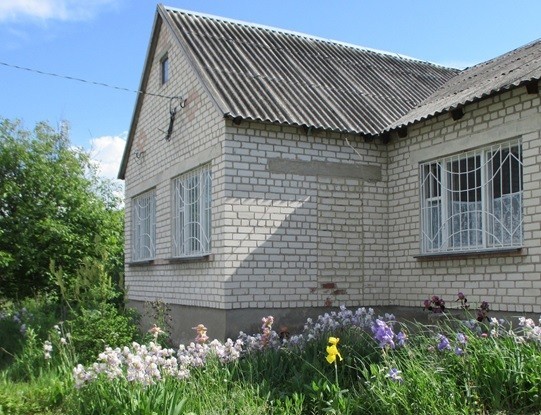 The next morning, I found in myself awoken by fried sausages and eggs sizzling on the stove. Tina was at the helm and already dressed for travel.

“Good morning, Edward. Eat this. The bus got postponed until 9AM. I can show you where to get good milk.”

We headed past the policeman’s house with the big secret, and arrived to the house with fresh milk. Opening a red door, I noticed a plant-less yard pecked over by chickens, running in all directions. An old couple were having a watery meat soup for breakfast.

Hunchbacked, with clear blue eyes, head wrapped in babushka style scarf, we were welcomed in by a gentle woman with missing teeth and very long hairs coming out of her chin like she had stepped out of a storybook. The milk she handed me came in a mason jar, white and foamy, and warm to the touch. She must have just milked the cow. A foodie first for me.

Tina asked me to go with her to the bus depot to distant Zhitomir. She also called me later that afternoon to ask if I would pay the UK Telecom bill and have a document ready for when the postwoman would come collect it. As her house-sitter, I would also help Tina manage her post, scanning and emailing contents to her when she had left the Ukraine.

Tina impressed me as a highly competent woman who could be on four phones at once, if she could; orchestrating, and jumping through one hoop after another. There was something heroic in the power of a woman who could reach across the internet and bring a complete English-speaking stranger into her abandoned home. Now I was truly alone. Still echoing in my head were all of her instructions delivered in a series of mental post-it notes. She was thorough. I was as ready as I would ever be for my long term housesitting near Kiev!

Her parting words to me were: “Eat anything you find.” “Move anything as you like;” and “SKYPE me whatever you need.” With the neighbour’s butter, eggs and milk, my first independent act was to vigorously whip myself a fresh omelette, getting good “air” into the whites and imagining how I was going to beat some living air into this house, if only for awhile…