Top 10 things to do in Malaga when housesitting and traveling

Top 10 things to do in Malaga when housesitting and traveling

The opportunity for traveling or housesitting in Malaga affords the visitor a great opportunity to enjoy a unique European destination with a rich ancient and modern cultural heritage. In recent years, Malaga has received significant investment toward the city’s infrastructure redevelopment, enabling the city to benefit from an efficient infrastructure reborn with new motorways, and public transport. With an enviable location offering sun, sea and a vibrant culture there is much to see and enjoy. Here we offer an exclusive set of recommendations for the top 10 things to do in Malaga when housesitting or traveling, prepared by Rolando Quesnel a local Malaga expert and contributing editor to My Guide Malaga  offering the inside track on what to see and do when you are there. Don’t miss these!

What was a sleepy seaside port town 25 years ago, so run down that much of the old centre looked like a sleepy Havana in Cuba, has now been transformed into a thriving and enterprising European cultural hub. Once visitors started to flow into the city, the new businesses blossomed, the gastronomic innovations abounded, and the entertainment and tourist services followed.

Top 10 things to do in Malaga – History

Malaga is one of Europe’s most ancient cities having been occupied and active commercially for almost 3000 years. In that time, it has undergone successive waves of colonisation early on by the Phoenicians and Greeks, later the Carthaginians.

Its cultural inheritance is deep and rich due to these far reaching and historic influences. Even from before the times of the Roman conquest in 3rd C BC, Malagawas famed for its fish salting, figs and wines and other delicacies. It was (and still is) the most significant western trading port on the Mediterranean. The influence is visible across the city in the architecture, the cultural traditions and the agriculture and produce. 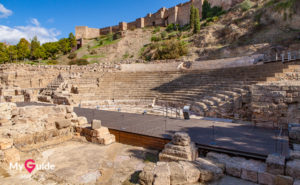 Ancient ruins of the Roman theatre of Malaga

From 218 BC, it was ruled by the Roman Republic and later the Roman Empire as Malaca. There are tours of the Roman theatres which last about 1.5 hours if combined with the Alcazaba Castle located nearby. Walking around the Roman theatre you will step back to the Roman Empire in the time of Augustus. In chronological order this is an excellent place to start your top 10 things to do in Malaga.

After the fall of the Roman Empire and the end of Visigothic rule Malaga was under Islamic rule for 800 years. In 1487, the Crown of Castille gained control after the Reconquista. The archaeological remains and monuments from the Phoenician, Roman, Arabic and Christian eras make the historic centre of the city an “open museum”, displaying a history of nearly 3,000 years.  Alcazaba is a palatial fortification built by the Hammudid dynasty in the early 11th century.  This is the best-preserved citadel in Spain

Centrally located near the Alcazaba in central Malaga, the Roman Catholic Cathedral was constructed between 1528 and 1782 following plans drawn by Diego de Siloe architect and sculptor. The interior is also preserved in the Renaissance style.  The façade, unlike the rest of the building, is in Baroque style and is divided into two levels. On the lower level are three arches, inside of which are portals separated by marble columns. Above the doors are medallions carved in stone; those of the lateral doors represent the patron saints of Malaga, Saint Cyriacus and Saint Paula. The Cathedral is worth a visit offering you an audio tour for the 6 Euro entry fee.

Top 10 things to do in Malaga – Leisure

The beaches in Malaga are stunning and deciding on one was a very hard thing to do for our list of top 10 things to do in Malaga. The location of Playa de la Malagueta makes it very easily accessible form the city centre, it is only a 10 min walk from along the promenade from the harbour.  Malaga has a stunning coastline also known as the “Costa del Sol” (Coast of the Sun). It is one of the most famous stretches of sea and sand in the world and so even near the city centre there are beaches that offer everything you could want for sport and relaxed seaside leisure. Within easy reach are the bling beaches of Marbella and not far along the coast the charming fishing villages of Nerja and La Carihuela.

Puerto de Malaga is a great place to walk along the promenades and soak up the atmosphere. There is a varied choice of bars and restaurants in the recently renovated harbour. The port and marina benefit from the significant investment for renovation and infrastructure by the European Union.

Top 10 things to do in Malaga – Culinary

The Mercado Central de Atarazanas is a must, simply because, like most old school markets in Mediterranean countries, the confluence of local fresh produce, preserves and delicacies, sold by the city residents with all their charm and passion, in an old characterful building, creates a mini-world full of colour, of sensation, of taste. The character and location of this traditional market are unique and make this easy to visit, if authentic shopping experiences are your thing.

Essence of the market

The Atarazanas Market is the central market of Malaga and it is an important part of the city’s history. The building was built in the 14th century and served as a shipyard with 7 elaborate arches surrounding its exterior. Today, only one arch remains and resembles a combination of Moorish architecture and 19th-century industrial design. Worth a visit for an authentic market experience.  The market is open daily from 8am until 2pm, except on Sundays. It is located centrally, behind the tall old buildings that line the central Alameda.

A must see in Malaga the Antigua Casa de Guardia is an ancient sherry bar where today wines and sherries are served to taste and buy in small and large quantities. Authentic local dispensary where the Malaga residents go for their own wine and sherry sampling and buying. The choice of wines and fortified wines is excellent, you can choose vermouth, sherry, muscatel, pajarate and other delicacies mainly in liquid form. Average price per glass is Euro 2 and each charge is chalked up beside you on the bar, avoiding any mistakes in totting up the bill. A historic bar, easy to find in the centre of the city, worth an hour or two to sample the local nectars.

Recovering from the recession of recent years the urban regeneration has ensured the strengthening of the restaurant industry in Malaga. The province has 8 Michelin stars – more than the city of Manchester. Walking and small plate dining in Malaga can be a culinary journey through Andalusian cuisine. Whether you go on one of the publicized gastro tours or simple follow your gut sampling the traditional Spanish tapas and wine in the Malaga cafes and tapas bars you’ll sample an array of delicious dishes along the way. Taste fine regional wines. try the tapas and learn more about the ancient Spanish tradition. Then get the inside scoop on Malaga’s renowned culinary scene.

Top 10 things to do in Malaga – Culture

The Botanic Gardens of the Finca de la Concepción are located just at the city’s northern edge and offer a remarkable environment rich in history and ecological diversity. A sumptuous park filled with dense sub-tropical vegetation, with over 50,000 plants from nearly 3,000 different species, it is one of the most comprehensive botanic gardens of sub-tropical species in Europe.

First laid out over 150 years ago in the grand style of the Enlightenment, the parks are open for all. They take inspiration from the great English landscape artists with strong neo-classical features. Its early fame was less to do with its beauty, and more to do with a collection of archaeological remains, including Roman mosaics and relics recovered from Roman villas and sites discovered from in and around Malaga.

Affordable bike and scooter rental options, offer a variety of tours of the gardens.

Malaga, despite not being among the largest cities in Europe, it has one of the greatest concentrations of museums of any city. There are 37 museums in total. We recommend you review the pre-selected list below and visit at least one for your top 10 things to do in Malaga. The sheer scale and number of museums available to view is surprising and thanks in no small part to the public authorities who have over the last 20 years, made a massive investment in culture. This has directly impacted on the rich cultural life of the city, drawing millions of visitors.

Selecting only one museum for our top 10 things to do in Malaga proved too hard for us, however, if pushed we tend to favour the Picasso Museum. Therefore, below we offer a selection from the 37 city museums to whet your appetite and show the range available to satisfy any cultural habit.

As Picasso himself had made clear in his bequest that there should be a permanent home for his work in Málaga as long ago as 1953. It took a combination of his heirs, the Junta de Andalucía and city authorities to achieve this. It was a major investment and a complex project. A 16th Century palace had to be fully adapted and modernised. The expansion required the demolition of 18 other adjoining properties to deliver the complex. First opened in 2003, it now has 400,000 visitors a year.

Roughly 70% of these are foreign tourists. The remaining 15% are from outside of Malaga. So, its ability to draw large numbers of visitors to the city is clear. The strength of Picasso as an icon, as a cultural brand almost, means that the city has been able to mine this attraction very successfully. This has not been an accident, but a deliberate piece of policy at local and regional level, to use museums to create a cultural infrastructure on an internationally credible level, with the aim of making Málaga a world-class destination.

The Picasso Museum – The master of 20th century innovation is honoured here in a fantastic permanent collection of his work.

Municipal Museum of Malaga – Houses many works by local artists through the years, plus much local history.

Museum of Malaga – Recently opened collection of archaeological, decorative and cultural heritage exhibits of the city.

Museum of Arts and Customs – Glimpses life in Malaga through small rooms set up as time capsules of a life once lived.

The Wine Museum – Tastings and exhibits of production of Malaga wines.

The Glass Museum – A delightful and unique private collection of all manner of glassware and decor.

Museo Taurino – A museum dedicated to bullfighting and the history of the Malaga bullring.

Museo Albornia – An interactive educational museum about the ecology and life of Malaga’s sea, the Alboran.

Aeronautical museum – A collection of aircraft and exhibits at the airport, all about flight.

Start your housesitting pet-sitting adventure or to find your house and petsitting solution register with HouseSitMatch:

HANDY BLOGS ABOUT HOUSESITTING AND TRAVELLING IN SPAIN

Housesitting while I travel in Spain – by a housesitter