A few years ago a friend who is a journalist asked me to do a spot of cat-sitting in London. She wanted me to stay in her flat for a week to look after things while she popped off to the Washington to report on a brewing political story. The one condition was I had to do a spot of pet-sitting well cat-sitting actually. What it meant for me was I could live rent free in one of the most vibrant cities in the world for a whole week on my own!

Cat-sitting in London means I can travel for free 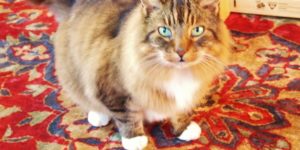 I had been petsitting for friends and neighbours in the past. And I loved animals so I felt confident I could do this for my friend.

In exchange, she asked that I look after her property and more importantly feed and care for her cat, Cleo. No problem, I said. Cat-sitting seemed an easy enough task for me, I had had cats and done some cat-sitting for friends in the past.

Moreover, Cleo is cute and friendly so it was an easy commitment to make – and so I planned to do become a cat-sitting tourist in London. In fact I felt very lucky. Not only was Cleo a joy to care for but I hadn’t had to fight off other cat sitters in London for this fun assignment.

I have always loved visiting capital cities. And if given the option I would choose a European city tour for a week’s holiday almost every time. The flat was on the Westminster side of Pimlico in London. So a walk around Westminster, Big Ben and this area of the West end of London was easy. All in all this was a fantastic location for a spot of cat-sitting in London.

1. Houses of Parliament and Big Ben

There has been a palace on this site since 1050 when Edward the Confessor the ruling Saxon monarch of the time built the first structure and now it is the very centre of British government. What we see today was designed by architects Sir Charles Barry and Augustus Pugin in 1844. Pugin also designed the Elizabeth clock tower, now more famously known as Big Ben (which is actually the name of the bell inside the tower).

Number 10 Downing Street is famously the London residence of the Prime Minister of England. Needless to say when you walk up to Downing Street there are police guards at either end to prevent you from actually walking through the street. Prime Ministers have lived in Downing Street since it was first offered to Robert Walpole by King George II in 1732.

Apparently he accepted the gesture on condition that the property be held for all Prime Ministers in office after his tenure. Nearby, the Horseguards of Whitehall are another classic and instantly recognisable image. They change the guard at Whitehall Palace at 11am every weekday. It’s definitely worth a look if you can squeeze through the crowds and get right up close to the railings.

3. Striding up to Trafalgar Square

By the time I reached Trafalgar Square the sun was out and the streets were vibrant. I took a couple of hours to tour a few rooms at the National Gallery, which is always splendid. And even more spectacularly the general collection is open for all to see, it is still free even in these times of austerity.

One place I had always wanted to visit was the former home of the architect of the Bank of England, the British Museum and many other landmarks that make up the established and familiar landscape of central London – now called the Sir John Soane Museum.

They have an amazing collection or paintings and artefacts, much of it eclectically collected and either placed or hung by himself. Moreover the curator often gives talks on specific items in the collection. This was a great visit – I only wished I had arrived on an evening when they were giving tours by candlelight. Look out for those via the website.

Despite spending nearly a whole day there, I didn’t get through all the collection that was present. There is much more in storage that comes out on rotation. I do plan to go back one day. Soane was such an avid and diverse collector that his tastes extended beyond the classical world and science. He had a passion for Shakespeare. When the manuscripts thought to be the Bards original copies came up for auction he bagged them for his own collection. You must write to request a viewing, but you can actually see them! Admission to this museum is free.

For literary tourists this is a must when in London, especially if you are a nut for the Romantic Poets. Despite spending only two years (1880-1820) in this Georgian house, in one of the leafier suburbs of North London, Keats stay in this house proved to be a great stimulus for the young poet. This is where he fell in love with Fanny Brawne and wrote some of his most iconic and much quoted poems: The Eve of St Agnes, La Belle Dame sans Merci, Ode to a Nightingale, Ode to Autumn and Ode to Melancholy. It is a truly lovely spot and I really enjoyed walking around the house and grounds, indeed I recommend it. There is a very small admission charge to enter this house.

When I came home in the early evenings, returning to my cat-sitting responsibilities I would have a pair of pleading eyes waiting for me. Cleo would stand demanding to be fed blocking my path to anywhere but the kitchen.

My duties when cat-sitting

I was invited into this home as a cat-sitter to do a spot of petsitting. And as cat-sitting was my main reason for staying in London, I tried to remember any issues our own cats had experienced in the past.  Just in case I asked my friend for her vet’s details.  The icing on the cake was that this trip afforded me free accommodation in the capital!

Actually, my friend made my cat sitting assignment really easy for me. She had prepared her home thoroughly for a visitor. I had my designated sleeping area, in the cats room beside the cat toys and scratch poles! There were labels on the main cupboards containing cat related supplies.

My cat-sitting assignment was made pretty easy actually because my friend also bought a whole week’s worth of cat food and treats. She said that Cleo was actually quite fussy. She had a sensitive stomach. So I should only feed her exactly what was left for her and to stick to the prepared schedule. Actually, she had written quite an opus on the care and maintenance of Cleo the cat for my cat-minding adventure!

Once I had clocked the five pages, closely-typed, of daily routines I sat down to read the rest. The details covered litter trays, fresh water supplies and exact quantities of food. It was useful.  I also noted the list of key contacts in case of emergency which included the local vet, the usual pet-sitters mobile, and her mother in Scotland. I picked up the routine and made sure that her meal was always on time. So I had been well briefed which meant that all went well while cat-sitting and Cleo seemed happy.

If you are interested in house-sitting as a way to make your travel affordable? Register today as a House sitter on HouseSitMatch.com

Start your housesitting adventure today. Find your house and petsitting solution by registering with HouseSitMatch:

Handy articles and blogs about housesitting and housesitters

At Housesitmatch.com we like to share useful blogs and practical advice about housesitters, housesitting and pet sitting. We hope you find this small selection of our blogs on house sitters useful.